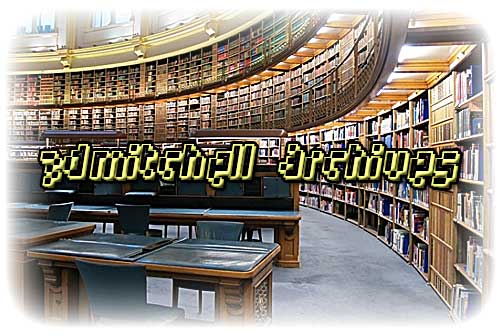 News related to the archive can be found here. 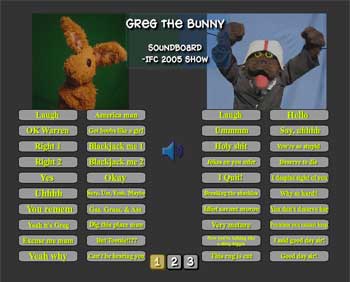 The Greg the Bunny Soundboard  is a soundboard that I created in one day based on a show done by IFC in 2005.

This soundboard is intended for mature audiences only.

There are three screens with over a total of 80 sound clips. 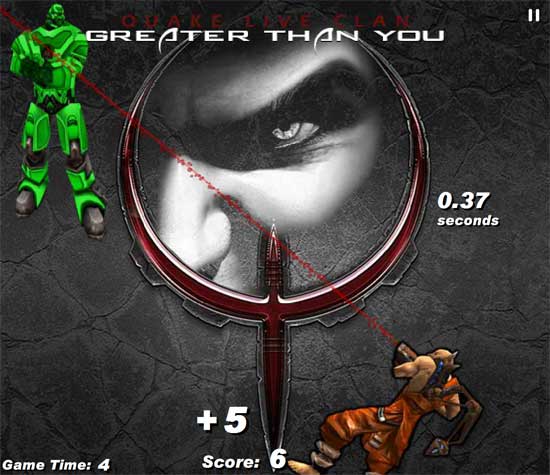 The Quake Live Rail Game is a flash project where the sole purpose was to create a flash game that could track/retrieve high scores through a database. 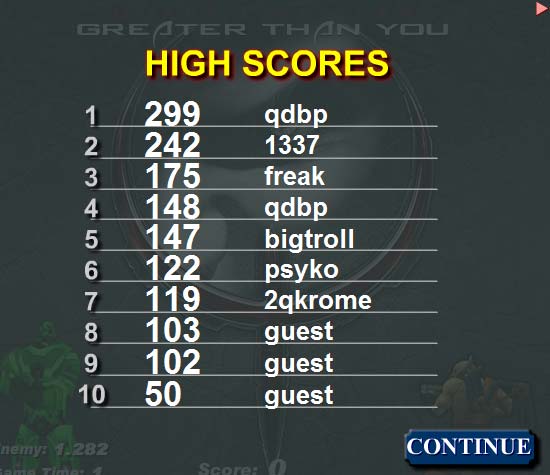 The database is set up to allow high scores to be moderated on an administrative panel, supports multiple games, and provides an API as well. 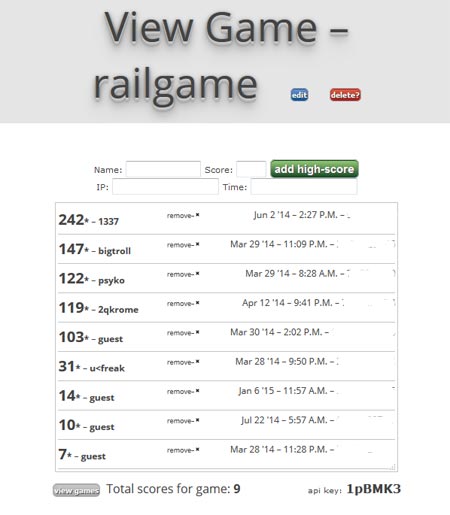 The Halloween Banner was a project where I modified a simple halloween banner with some masking and shading effects. It was then added for October as the homepage banner of the website. 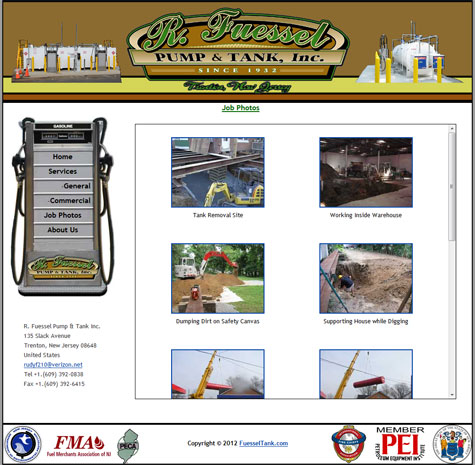 FuesselTank.com was a project where the concept was to keep the design simple and present an overview of the company and their services. The page was formatted with basic dimensions in mind and the left navigation was custom designed. 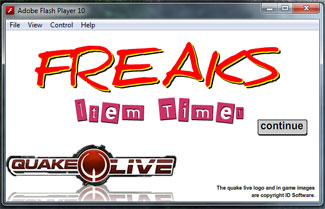 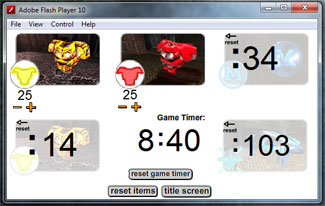 The Quake Live Item Timer was a simple flash project that I created in an hour or so to time items while watching duels in QuakeLive. The timer allows you to individually control each timer so you can effectively time multiple items if you can click on them properly. If I mapped it to keyboard shortcuts in flash I am sure it could be used in game with AutoHotKey but I didn't set this up for that.

Source code is available upon request, send an email to Mitchell.

The HTML5 Bouncing Balls Example was a simple project I did to experiment with HTML5 canvas. I first saw this implemented on Google’s homepage and wanted to learn how it was done. The project took a lot of Javascript work and was completed quickly due to the source code provided by Rob Hawkes. I achieved the desired effect and added another layer to give the 3D section depth but it did affect performance in my testing. 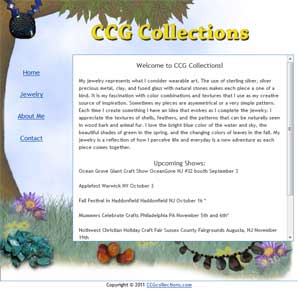 CCG Collections was a website designed for a custom Jewelry maker and special consideration was taken into making the jewelry pieces the focus of the site. 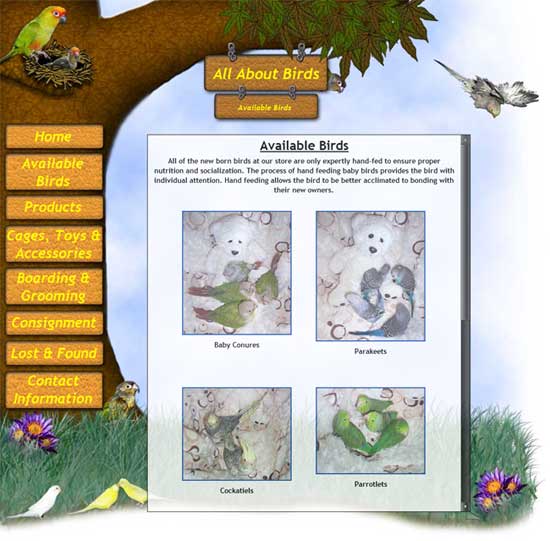 All About Birds is a custom design drawn out on paper by the customer and then designed in photoshop. The site was for a friendly bird store located in Pennington, NJ specializing in boarding, grooming, hand-feeding, seed, cages & toys. 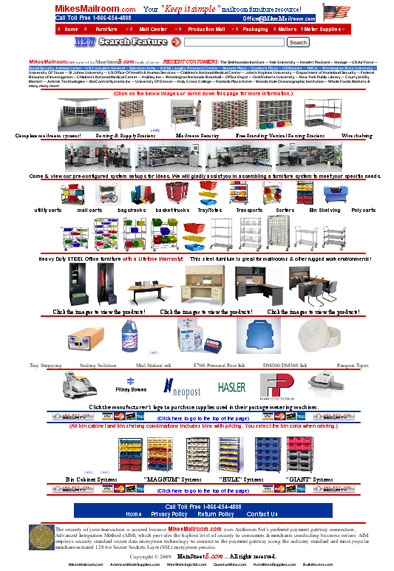 MikesMailroom.com was a project where the site had to be redesigned to have a better feel and functionality.

The 3DFlash Splash Page was created as a placeholder for the 3Dmitchell.com site while it was being built. It also has a PHP hit counter for page views and unique visitors. This is just to ensure that the viewer is presented with something more than the default page of the hosting company.

Resistance Tournaments was a little project done to encourage organized tournaments for Playstation. It was a good proof of concept, but short lived due to a small audience.

Text Based Fishing Game was a little project that I developed over the course of a couple hours. It isn't complete and is a project I am taking my time on. 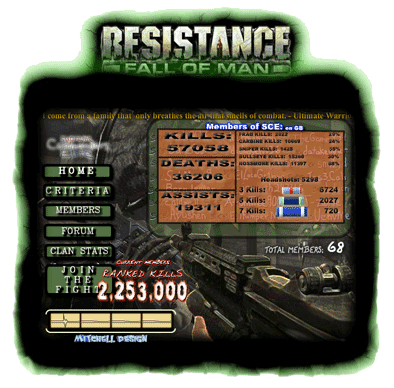 The Supreme Commanders Elite website was a project I did for a game called Resistance Fall of Man for the PS3. It was a unique project taking me 16 hours to complete and afterwards it would take me too long to update the stats for each person. With the way the flash was set up it was not easy to update the stats automatically and I decommisioned the project.

The Mitchell Design Template was my first try at a flash template. I wasn't going for anything spectacular, just a proof of concept. It doesn't have any links that work, the concept is that you stop the objects/buttons circling at the top and then click your button and the content will load either below the buttons or into the Flash piece at the bottom. The buttons can also be pressed while they are moving.The TV monitors were just made as a place holder but a text box could be loaded over them.

Mitchell Design Computers Tutorial is a project that I did to explain the 4 basic types of computers that I build.

The Beginners Tutorial is a compilation of a couple objects that I created using tutorials. I then went ahead and wrote my own tutorial inside of the flash document to make sure that I would not forget how to create any of these objects in the future.

The Custom Computers flash image presentation tool was used to showcase a couple systems I had built over the years. Since then I have built around 15 more systems and have spent much more attention to proper wiring in the latest systems.

3000GT Movin was a very simple project that I made to see how difficult it was to blend a variable speed background with a moveable image in Flash.

Mitchell Design was a nice full flash site that I edited last in early 2009 but decided to scrap it and keep it for a template for future projects because it is very well done. There is some extra stuff I was messing around with in the portfolio section. This project taught me most of what I know with advanced actionscripting and interface building.

The SpeedFactor Gathering Site was done back in 2004 for a friend that owned a 3000GT/Dodge Stealth specialty shop, this version is the original copy before the extra information was added in.

The archives contains most of my publicly released work that has been either outdated or expired in some fashion. Current projects are listed on the projects page and other recent items can be found in the open source section. Archived news related to the archive can be found here.

Check out the News page for the latest website updates while the Forum can be joined for discussion/research.

We have solutions for networking, web development/design, computer building, and electronic repair.

3Dmitchell has been a provider of quality technology based services since 1997.